Every Scene Needs Conflict and a Change 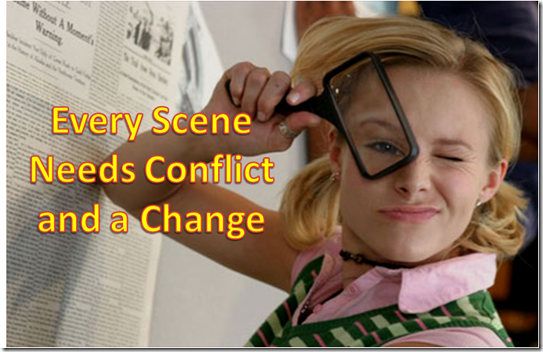 Do you have a scene in your novel where nothing much really happens? Where there’s not a lot of tension and no major developments or setbacks? If so, rewrite that scene or take it out, with any essential bits from it inserted somewhere else. If you leave it as is, that could well be the scene where your readers decide the story is lagging and they put it down — and don’t pick it up again. Today’s readers are much more impatient than readers of the past. Every scene needs to grab them with lots of tension and intrigue. Whatever happens needs to be “shown,” not “told” (for the most part), and the events and dialogue need to move the plot along and result in a significant change in the characters and their situation.

As James Scott Bell says, “Every scene in your novel should have tension, whether that comes from outright conflict or the inner turmoil of character emotions.” How do you create that needed conflict? According to Bell, “You create outer tension by [first] giving the POV character a scene objective. What does he want, and why? It has to matter to him, or it won’t to us.

“Next, what keeps him from the goal? It may be the opposing action of another character, or a circumstance in which he finds himself.

“Finally, make most scenes come out with the character suffering a setback. This ratchets up the tension for the scenes to follow.”

Of course, not every scene is going to have a fight or a screaming match. Depending on your genre, some scenes may be quieter than others. But even in those scenes, it’s important to show the inner tension of your viewpoint character — worry, concern, irritability, anxiety, doubt, indecision. Also show the tension of other characters by their words, tone of voice, body language, etc.

As Hallie Ephron says, “In the course of each scene, some change should occur to move your story forward. It’s not enough for a scene to just introduce a character or convey lots of fascinating information about the setting. In every scene, something has to change. This means that something has to happen that changes the situation, or a character’s perception of it, and that change propels the story forward.”

The change that occurs in a scene can be a shift in either a character’s emotional state, their relationship with others, or their situation — usually for the worst. And the change needs to result in character growth or plot change.

Besides making sure every scene has conflict and change, and events are “shown,” not described or “told,” another tip for keeping your readers turning the pages is to start each scene as late as possible. In other words, don’t spend a lot of time with description and scene setup – start just as things are getting rolling. However, it’s important to remember that, as Ephron counsels, “Even though you want to start late, don’t forget to orient the reader at the start of each scene by establishing, right away, when and where the action is taking place, and who is present.” This can be done in a sentence or two, or even a phrase.

Also, as Ephron notes, “Where to end a scene is also an important choice. A good rule of thumb: End as early as possible. In other words, don’t let the scene dribble off. End it at a strong moment and leave out any unnecessary final bits.”

A blueprint for writing strong scenes:

Jack M. Bickham gives us some specific advice for writing powerful scenes: According to him, any time you start to write a scene, you should go through the following process (reworded slightly for brevity, and my italics):

Bickham concludes, “Please note, however, that none of this can happen – nothing can work – if the scene does not grab your readers and intensely involve them. To accomplish that, the scene must be lifelike. And the greatest danger to this verisimilitude is summary [as in telling instead of showing]. Fix it by playing out that part of the scene in detail. Nothing less will do.”

What about you? Do you have any good tips to share for writing compelling scenes?

Jack M. Bickham, The 38 Most Common Fiction Writing Mistakes (And How to Avoid Them)

Hallie Ephron, The Everything Guide to Writing Your First Novel

Jodie Renner is a freelance editor, specializing in suspense/thrillers, mysteries, and other crime fiction, as well as YA and historical fiction. Jodie’s craft-of-fiction articles appear regularly here and on five other blogs. www.JodieRennerEditing.com.

Thanks to The Thrill Begins for allowing me to post my craft-of-fiction articles here every month. And a special thanks to Miranda Parker for her great title designs at the top of my posts!

lol, Jodie. Do you know I just got back from the dentist? I have been there since 9AM. smh

I took a writing workshop a few years go on writing scenes and sequels. It helped me a lot to transition from chapter to chapter and push the story to the next plot point. But it is like a puzzle when you write that way. I have a love hate relationship with giving each scene tension, although I know it needs to happen.

I think I know what you mean about the love-hate relationship with giving each scene tension. Rather than letting things go well with your protagonist for a change, you need to stir up more trouble for her! Unfortunately, if everything is solved, and no trouble is looming on the horizon, the readers will get bored and put the book down, so you can't do that until the end.

I agree, the post looks great, and the content is always fab. Jodie, you mentioned two of my favorites masters of craft--Bickham & Bell. Thanks for being such a good friend to the Debuts.

Yes, I love both of those "writing gurus," Jenny, and I quote them often in my articles, as I feel that their take on what makes effective, compelling fiction is right on.