What is a Small Thriller? 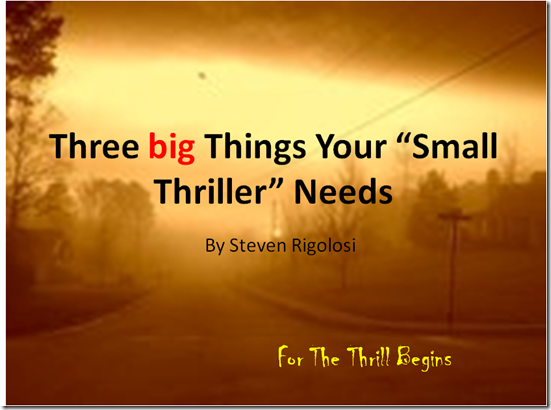 At some point in our writing careers, most of us wrestle with the definitions of genres and subgenres. What exactly is a mystery? How does it differ (if at all) from a crime novel? Is it all right if characters use profanity in my cozy? What is suspense and how do I create it? Or, more importantly, how does the reader define and experience suspense? And of course for the debut author, are my perceptions and definitions in line with what agents and editors want? 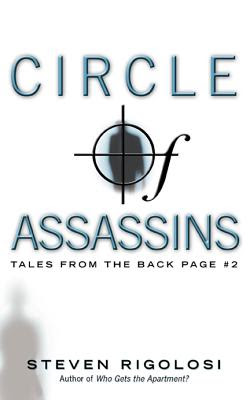 We hope we can answer these questions by the time the book is published. In my internal dialogue, I think I have written a caper/cozy (Who Gets the Apartment?), a novel of psychological suspense (Circle of Assassins), and an urban satire (Androgynous Murder House Party).

Never in any of my outlining, plotting, or positioning self-discussions did I consider that I might be writing THRILLERS.

Why? Because to me a thriller is a Big Book with Big Players. Perhaps the protagonist is John or Jane Q. Public, but John or Jane inevitably comes up against Major Forces: the government, a renegade faction of the FBI, an international spy or terrorist network filled with moles and triple agents, or a global corporation with unlimited money, resources, and power. Or Bioengineers doing unsavory things with the human genome for profit. High-speed chases through Zurich, Abu Dhabi, Prague, Johannesburg, and Taiwan…Big Things. At stake is the fate of the Human Race, not to mention Morality, Country, Liberty, and Family.

But, after taking a second look at my work, I ask myself: Must a thriller be Big?

Most of us, whether readers or writers, have a fairly small sphere of influence. We work, we spend time with family and friends, we take a couple of weeks’ vacation each year. If our worlds are small in comparison to those of international jet-setters, perhaps we can have “smaller” thrillers where various microworlds interact, where life-changing events happen to everyday people who are not engaged in ferreting out Al Qaeda cells.

If I think in these terms, then maybe Circle of Assassins might be called a “small thriller.” It tells the intersecting stories of five unnamed people who make a pact to exchange murderous favors. Their tales (and identities) unfold as they tell their stories, describe why their victims deserve to meet their fate at the hands of an assassin, and live with the aftermath of the killings.

One character, who grew up impoverished, is willing to fight to the death to preserve the tiny Cape Cod home she purchased with her life savings. Another is a traditional Italian-American whose father has installed Old-World ways into him – traditions that clash with modern expectations regarding family and gender roles. A third is an academic who sees her department chair as the living embodiment of white privilege.

Each of these people sets events in motion that have ripple effects among smaller communities: an extended family, a college campus, a suburban neighborhood. The drama that unfolds is personal and intense - definitely not as world-changing as pharmaceutical companies manipulating national governments, but, I am hoping, more immediate and more at the level at which the average person lives his or her life, encountering smaller-scale villains who are just as greedy, manipulative, or power-hungry as those CEOs and Directors of Government Agencies.

Still, I don’t think we’ll be seeing any novels subtitled “A Small Thriller” any time soon.

But if you wanted to give it a try… 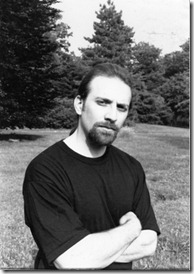 A lot of “big thrillers” are criticized for stereotypical or undeveloped characters. A small thriller offers an opportunity to combine a thrilling plot with intense character study.

The big thrillers often come in at about 400 pages. A small thriller covers much less of the world (and has much less, perhaps even zero, jet-setting), so it might be able to tell its story in a tight, taut 300 pages.

3. Plot twists and a memorable ending.

Regardless of its size, a thriller has to thrill. This means a good story with plenty of surprises, turnabouts, betrayals, unexpected twists, and – my favorite – a surprise ending.

Question: Do you think you’ve written a small thriller? How has it worked for you?

Steven Rigolosi is the author of the Tales from the Back Page series. The most recent installment is Androgynous Murder House Party. He lives in Northern New Jersey and is at work on the next book.Visit him on Goodreads.

If you are a debut suspense or thriller [even small thriller like me] author whose book will release within the next year, we invite you to join International Thriller Writers (ITW) Debut Author Program. Click this link to learn how. thrillerwriters.org/join-itw/debut-authors

Related articles in the blogosphere:

First of all, I love this idea. I feel like the concept of small is right on--and that as Steve says, these stories can be as thrilling or more than so-called big thrillers. Every successful thriller has to personalize the stakes--and perhaps small ones get their first. Even the Reacher novels end up being about a man, not a country. I wonder if we could call these intimate thriller? Close up thrillers? We need a good name...Great topic, Steve--and by the way, CIRCLE OF ASSASSINS was one of my top 10 books last year.

Jenny, I agree and consider my novel, A Good Excuse to Be Bad, a small thriller. My main character protects her neighborhood, family, and town. She's a small hero.

I think Easy Rawlins mysteries are small thrillers, too. The stakes are high not just for Easy, but his neighborhood. I loved this post.

Interesting. Not a thriller/mystery/cozy/caper writer, but I enjoy reading them all.

Love to read thrillers and mysteries. Would love write one some day.

I think writing a "small" thriller would be harder than writing a "big" one. With global disaster and large-scale collapse looming, the author can get away with less meticulous craft to create tension. Capturing the reader when the stakes are more intimate requires a more skilled writer. Congratulations Steven for pulling it off!

A thriller can be both big and small. I'm thinking of recent debut novel THE THINGS THAT KEEP US HERE by Carla Buckley. The backdrop is very big--a global flu pandemic with millions of deaths--but the actual story is small: one estranged couple and their kids in a suburban Ohio home, trying to get through one day at a time. Thrillers that focus on an intimate setting created by a big backstory (war, etc.) may be the most successful stories of all. (I think also of EYE OF THE NEEDLE, which has the ultimate geopolitical backstory but tells a close-up story about a lonely woman living on an island.)

Pat, thanks for stopping in. I love cozies, too. Never thought about the concept of a small thriller until Steven pointed it out.

I wonder if aspiring authors shy away from writing thrillers, because they don't want to deal with larger than life events that we typically associate with thriller novels.

Lisa, glad you stopped by. Please continue to visit. We share great information for aspiring and new authors.

Amy, I agree. When they stakes are so high (Saving mankind) you can easily put the character in the back drop. Perhaps that's what some mean by plot driven story.
However, I do like the concept of having an intimate relationship with the hero.

Thanks for the great book recommendations. I will check those out.

Hi Steven. Interesting post. I love the never-ending quandry over what defines a mystery versus suspense versus thriller versus crime novel. Seems the lines there are a bit blurry---and that's okay---as long as we are writing great stories for readers!

I'm also having fun mulling over your big/small thriller observations. Thanks for a thought-provoking post.

This post also defines my favorite type of thriller to read and to write. Personal preference - I prefer higher personal stakes in a smaller setting. It feels closer to home for me than a James Bond type story - fighting the evil world mastermind.

Hi everyone, and thank you for the comments. To be honest, when I was writing this blog entry, I feared I was "stretching" the thriller definition to the breaking point. I'm glad to find that perhaps there is an underground "small thriller" community out there. For everyone out there , best of luck with your debut books (and beyond)!