A thin line between Crime and Horror Fiction 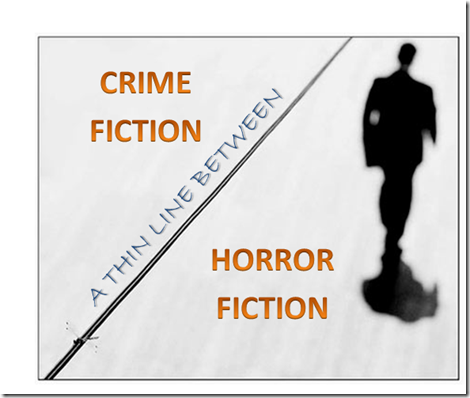 I was invited to share my thoughts with you about the line between crime and horror fiction. Many purists argue that they are two distinct forms. I disagree. My own writing has often been d 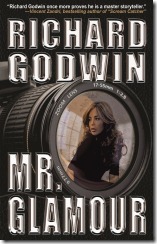 escribed as a blend of crime and horror fiction, and I want to look at what the connections are.
What do we mean when we talk about horror? What is it that horrifies us?
The genre evokes a painful or intense fear, dread or dismay. Douglas Winter said it is an emotion. It is also connected to the irrational.
As a writer I believe people are often motivated by irrational urges they seek to understand. Some of those urges may be criminal. Extreme criminality involves psychopathology.
I explore these areas in my novels. Mr. Glamour, my second novel, published in paperback this week by Black Jackal Books, is about a wealthy and beautiful group of people targeted by a killer who is watching everyone. These people have irrational habits that threaten their security. And they can buy anything, except safety as the killer strikes.
Horror undermines our certainties, inasmuch as crime threatens our securities. There is recognition and alienation wrapped up inside horror. Extreme crime evokes a horror that is more real than something a reader knows does not exist. More horrors exist in the history of the atrocities committed by the Nazis than in any novel.
I believe Thomas Harris is another author who mixes the genres to great effect.
Stephen King observed that in horror there is a tension between the Apollonian and Dionysian. This stems from Nietzsche’s “The Birth Of Tragedy”, where he examined art in terms of a dialectic between Apollo, seen as light and structured, and Dionysus, seen as dark and chthonic.
In crime fiction, on a simplistic level, we have the struggle between crime and law. The narrative thrust is towards restoring order. To that extent the genre is conservative. And arguably in its resolutions it is unrealistic.

My novel Apostle Rising is about a serial killer crucifying politicians. The narrative takes you deep you into the killer’s mind and the final revelation about his identity is a shock. It is a shock because it subverts identity. It leaves you questioning. It changes the lives of the people who came into contact with the killer’s acts, especially the police, and it leaves them altered.
Obsessions drive men and women to dark places, places where horror breeds.
Mr. Glamour is a crime novel with elements of horror in it. The killer has unusual powers. He steps inside the minds of the investigators. He changes their lives and they engage in acts that may be deemed questionable for police officers. They lead double lives and it is in their double lives that they find something they lost, some aspect of their beings their notions of identity precluded.
I hope it conveys what it is intended to, a great story, and one which shows that people may not know themselves as well as they believe they do.
My debut novel Apostle Rising did well last year, got great reviews, and sold foreign rights in Europe. I hope Mr. Glamour does as well. It’s about a glamorous world of designer goods, beautiful women and wealthy men and a killer who is watching everyone. It was released last week by Black Jackal Books and is already picking up great reviews.
You can find out more about me here .
Posted by Unknown

Thank you for shedding such light on this topic, Richard. As you know, I am a huge fan of your work and your most unusual blog, and can't wait to read your latest, MR. GLAMOUR.

Now I also understand why I, consummate crime fiction fan, was all but weaned on Stephen King and Ira Levin and William March and Frank de Felitta and David--who wrote THE OMEN?--and William Peter Blatty others.

My usual way of thinking about the thin line is as a Before and After--the suspense novel takes place just as--or a few moments before--the characters are about to cross over. Apollo and Dionysis are an even more colorful way to put this. Thanks for the intriguing post!

Thanks Jenny. It doesn't surprise me that we share tastes. I do believe extreme crime is horrifying. Something I explore in my novels is the effect that has on the police inspectors dealing with it.

Excellent analysis of that juncture where crime and horror meet, Richard. And who better to do it than you, whose work lives in that knife-edge space.

I'm also, of course, a fan of your work and blog. I'm looking forward to Mr. Glamour. Congrats!

Agreed, excellent post about the two genres. I think many of our genre lines are very blurry, and have more to do with helping us organize reality than with reality (including fictional reality) itself.

Great summary and analysis. This debate over the lines between horror and crime thrillers has raged for ever and will likely never be settled, except in the minds of the individual readers. "Cross genre" is probably just a way we admit to our readers that we're unsure where the line is as well.

I agree with you that Horror is simply what horrifies us. The lack of a supernatural element does not make make works like your book Apostle Rising and Thomas Harris' books any less horrifying. I say let the debate rage and keep writing great books that bridge whatever gap may exist!

I look very much foward to Mr. Glamour.

Linda thank you sincerely, that is a great compliment from you. And your Chin Wag is due to post at The Slaughterhouse, that is Linda's excellent interview at my blog.

Jeff, thank you, to be mentioned on the same page as Thomas Harris makes my day. The truth is we all love a good story and they are not written with a guide book in our hands.

Good point. I know you posed this question to me before, Richard and my first thought was there is no connection. For one is act the other an emotion, but the way you put it.. the high pitched irrationality of thinking is similar to extreme emotion. One pushes the other causing an explosion of extremes which is often what we get in your writing. Very interesting! Can't wait for my copy to arrive in the mail!

Richard, I totally agree with your position on the link between horror and crime fiction. It is generally assumed that horror only equates with the supernatural, but you put it simply and correctly. Horror is made up of what horrifies us. Jaywalking is a crime, but it doesn't exactly give anyone nightmares. But crimes that are brutal and senseless are about as horrific as anything can be. Regarding crime, what horrifies us is the unknown and the seemingly random selection of victims. Killers walk among us each and every day, and that is the stuff nightmares are made from. You fill your stories with the horrors of crime and the two genres (if one wants to classify them as separate) walk hand in hand in your novels. Excellent post.