The Reinvention of Me


Sometimes failure is a good thing. Although you’d never hear me utter the words “blessing in disguise,” I suppose that’s what you could consider the bad news I received in 2011 when my agent asked my editor whether she’d like to read my proposal for the fourth Kevin Corvelli novel.
“Actually, we’d prefer to see something new from him.”
The moment I heard those words I experienced both a pang of grief and a jolt of excitement. Grief for the series of legal mysteries that I’d spent the last half-decade writing and promoting. And excitement about the possibility of a fresh start. A new series, a new setting, a new hero. Maybe even a new genre. I thanked my agent and promised I’d have an idea to her by Friday.
Truth is, I could have blurted my new idea to her right then and there over the phone. The idea for Good As Gone had planted its seed two years earlier, after reading a one-page article on a real-life private investigator who specialized in retrieving children kidnapped by their estranged parents and taken overseas to countries that don’t recognize U.S. custody decisions. I had immediately envisioned a Taken-style thriller that would transport my new tough-guy hero to exotic locales where he’d be pit against criminals from every walk of life, from Eastern European gangsters to Latin American narco-paramilitary forces.
Roughly a year later the book was written, the contract signed, and I was no longer just an author of quirky legal mysteries set in Hawaii. The advance I received was far greater than anything I’d hoped to get for a fourth Kevin Corvelli novel, and I was suddenly full of hope that my reinvention as an author of international action thrillers could be the catalyst for the writing career of which I’d always dreamed.
When the cover art for Good As Gone was first revealed to me, I was blown away. It looked as though it could serve as the one-sheet for a new blockbuster film starring Matt Damon or Daniel Craig. For the first time I could picture a novel with my name on the cover sitting in the bestseller racks in supermarkets and international airports. As much as I enjoyed writing the Kevin Corvelli books, I’d always known he’d never get me to where I wanted to be as a writer. Kevin Corvelli was cool and he was comfortable and his stories provided me the opportunity to show off my neurotic New York sense of humor. But he wasn’t the larger-than-life figure that could enthrall a wide audience and someday be portrayed by Ryan Reynolds on the big screen.
Simon Fisk, on the other hand, has that kind of potential. A former U.S. Marshal whose six-year-old daughter was abducted ten years earlier and never found, Simon Fisk is the type of haunted lone wolf who can leave behind a significant body count and still win the hearts and minds of readers. Of course, whether he (or I) will ever be even a moderate success remains to be seen. But ever since Publishers Weekly – who’d panned me mercilessly in the past – compared Simon Fisk to James Bond, I’ve at least felt as though I am in the game.


(Update: Since I wrote this article, which first appeared in Crimespree magazine this summer, I’ve been tapped to write the fourth book in Robert Ludlum’s Paul Janson series. I’ve recently begun work on Robert Ludlum’s The Janson Equation, which will be published by Grand Central in 2015. The second novel in my Simon Fisk series, titled Payoff, will be published by Minotaur Books on August 19, 2014.) 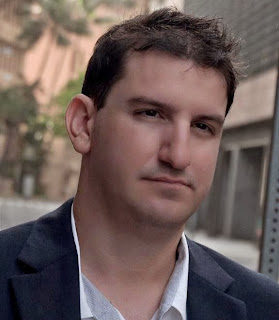 Douglas Corleone is the author of contemporary thrillers. His debut novel ONE MAN'S PARADISE, introducing hotshot defense attorney Kevin Corvelli, was a finalist for the 2010 Shamus Award for Best First Novel and winner of the Minotaur Books/Mystery Writers of America First Crime Novel Award.
Douglas Corleone's first international thriller, titled GOOD AS GONE, featuring former U.S. Marshal Simon Fisk, was hailed by the Huffington Post as "a heart wrenching, adrenaline producing adventure that...leaves the reader gasping for breath at the end."
A former New York City criminal defense attorney, Douglas Corleone now resides in the Hawaiian Islands where he is at work on his next novel.

Visit the author online at www.douglascorleone.com.

About Good As Gone