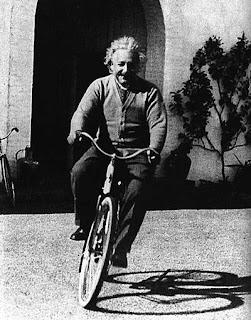 You know the feeling: You’re at an impasse with a character or plot point and you can’t seem to dissolve it. You’re frustrated, perhaps desperate. It’s going nowhere, but you’re on a deadline. You’ve run out of ways to spur your muse.

Consider this: Don’t work so hard. The less you push, the better your chances of getting what you need. Your brain actually requires some space to do its best work.

Science fiction writer Isaac Asimov realized this. Whenever he experienced writer’s block, he knew it was useless to force the issue. So, he’d go to a movie. He let his subconscious process the material in its own way. Once he returned, he invariably had new ideas. (I’ve tried this, and it works.)

Many writers, inventors, scientists, and artists have discovered the same thing. The solution arrives – aha! – seemingly from nowhere. But these moments seem so random, as of those people just got lucky.

The truth is that you – any of you – can harness your resources to produce them. According to recent neuroscience research, with a little work you can prime your brain for “aha! moments.” You can also provoke them on a regular basis. They’re a direct result of balancing work and play.

I call them “snaps,” because the flash of genius that really counts is more than just a shift of consciousness or new perspective. Snaps contain the trigger for momentum—they break through the impasse and snap us into action to switch strategy. So, first, you left brain work: do your research. Be diverse. Gather lots of different types of data, including items unrelated to your project. This “idea stew” forms your knowledge base.

Then, read through the material on which you’re blocked, pull away, and go do something fun. Relaxing your left brain releases your eager right brain to reshape the data you’ve stored into unique new patterns. When you least expect it, an idea will pop.


*Jonas Salk was working on a cure for polio in a dark basement in Pittsburgh. He failed time and again, so he went to Italy to wander through a monastery. There, he experienced a rush of ideas, including the one for the polio vaccine.

*Friedrich Nietzsche was out for a walk in the mountains when his famous Zarathustra tale tumbled forth.

*Martin Cooper was watching Star Trek when he first envisioned the cell phone.

*J. K. Rowling was on a stalled train when she snapped on a child wizard. “I simply sat and thought, for four (delayed) hours,” she said, “and all the details bubbled up in my brain.”

So, walk, juggle, take a nap, or take a shower: do something that eases the left brain’s cognitive load. Give it the break it needs to stir up your idea stew and find a delightful aha! insight. 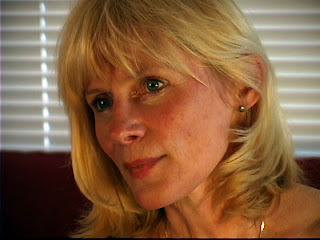 I have been writing for over two decades, in several formats and genres. I started with an academic book about a philosopher, but then I wrote commercial biographies of Anne Rice and Dean Koontz. Shortly thereafter, I got involved in immersion journalism and penned a book about my exploration of the vampire subculture, followed by one on ghost hunters and another about people in the death business. At this time I was teaching philosophy at Rutgers University, but I left to get another grad degree in forensic psychology, which changed the focus of my writing entirely. I now teach psychology at DeSales University and have extensive experience in researching and writing about criminal psychology and forensic science.
I have published more than 1,000 articles and 47 books, including Psychopath, The Ivy League Killer, The Vampire Trap, The Forensic Psychology of Criminal Minds, The Human Predator: A Historical Chronicle of Serial Murder and Forensic Investigation, Inside the Minds of Serial Killers and Inside the Minds of Sexual Predators. Additionally, I have published two vampire thrillers, The Heat Seekers and The Blood Hunters. My latest books are Blood and Ghosts and Snap! Seizing Your Aha! Moments.
I train homicide officers, attorneys, and coroners, and speak internationally about forensic psychology, forensic science, serial murder, and narrative nonfiction. I have appeared on numerous documentaries, as well as on such programs as The Today Show, 20/20, 48 Hours, Larry King Live and E! True Hollywood Story. I was also the recurring expert on the ID network for Born to Kill and the American Occult series, and I’ve consulted for CSI and Bones. I have a blog on the Psychology Today site called Shadow Boxing, and my forthcoming e-book this summer is The Sex Beast.
Connect with Katherine:
Website
Blog
FaceBook
Twitter 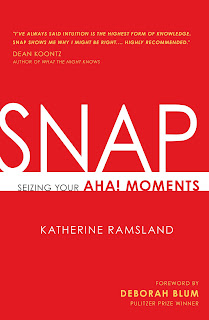 
Sudden flashes of inspiration have triggered many discoveries and inventions throughout history. Are such Aha! moments merely random or is there a way to train the brain to harness these seemingly unpredictable creative insights? In this fascinating overview of the latest neuroscience findings on spontaneous thought processes or “snaps,” Dr. Katherine Ramsland describes how everyone can learn to improve the chances of achieving their own Eureka! moments by adopting certain attitudes and habits. Snaps are much more than new ideas. Snaps are insights plus momentum—they instantly snap us toward action. They often occur after ordinary problem solving hits an impasse. We may feel stuck, but while we’re in a quandary, the brain is rebooting. Then, when we least expect it, the solution pops into our heads.

Ramsland describes the results of numerous scientific experiments studying this phenomenon. She also recounts intriguing stories of people of all ages and from diverse disciplines who have had a snap experience. Both the research and the stories illustrate that it’s possible to enhance our facility for snap moments by training ourselves to scan, sift, and solve. SNAP teaches us how to cultivate our own inner epiphanies to gain an edge in business, career paths, and even our personal lives.

Praise:
“This is a fascinating exploration of the mind when it's in hyperdrive, as illuminating as it is fun to read.” – Dean Koontz

“In this entertaining and thought-provoking study, Ramsland explores the phenomenon of sudden insight—‘a dramatic brilliance that floods the mind and clicks into place’--which she calls the ‘snap.’” – PW

“You may reach the end…and think, ‘Aha! I feel smarter than I did before I read this book.’”– Deborah Blum