Barry Lancet wrote this article for "The Thrill Begins" in October of last year. Since then, he's published his second novel in the Jim Brodie series, TOKYO KILL. It's my delight to repost his popular blog, "What It Takes."
~Marjorie Brody (no relation to Jim Brodie) 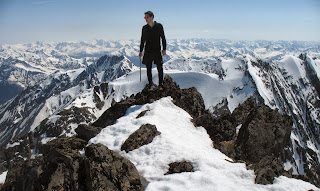 It took me ages to write JAPANTOWN. 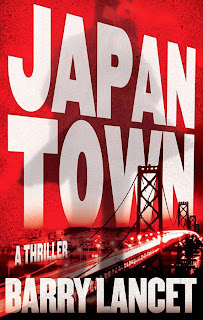 * * *
Five bodies.  One clue.  Not a trace of the killer.
San Francisco antique dealer Jim Brodie recently inherited a stake in his father's Tokyo-based private investigation firm, which means the single father of six-year-old Jenny is living a bi-coastal life, traveling to Japan to acquire art and artifacts for his store and consulting on Brodie Security's caseload at home and abroad.
One night, an entire family is gunned down in San Francisco's bustling Japantown neighborhood, and Brodie is called on by the SFPD to decipher the lone clue left at the crime scene: a single Japanese character printed on a slip of paper, drenched in blood.
Brodie can't read the clue either. But he may have seen it before—at the scene of his wife's death in a house fire four years ago.
With his array of Asian connections and fluency in Japanese, Brodie sets out to solve a seemingly perfect crime and at the same time learn whether his wife's tragic death was more than just an accident.
What he unearths shocks him.  Wishing to turn back but knowing the only way is forward, he focuses on the deadly secret that threatens not only his life—but also the lives of his entire circle of family and friends.
Barry Lancet moved from California to Tokyo in his twenties, where he has lived for more than two decades.  He spent twenty-five years working for one of the country’s largest publishers, developing books on dozens of Japanese subjects from art to Zen—all in English and all distributed in the United States, Europe, and the rest of the world.
His unique position gave him access to many inner circles in cultural, business, and traditional fields most outsiders are never granted.  Early in his tenure in the Japanese capital, he was hauled in by the police for a non-criminal infraction and interrogated for three hours, one of the most heated psychological encounters he had faced in Japan to that point.  The run-in fascinated him and sparked the idea for a thriller based on his growing number of unusual experiences in Japan.  He is now at work on his next book featuring Jim Brodie.
JAPANTOWN, his debut novel, has been optioned by J. J. Abrams’ Bad Robot Productions, in conjunction with Warner Bros.  For more information, please visit http://barrylancet.com/.
Posted by marjoriespages.com

Now this was inspiring. I had no idea the Big B had to go through all that.

I'm so glad you did, Barry.

I even just gave you a nickname for it :)